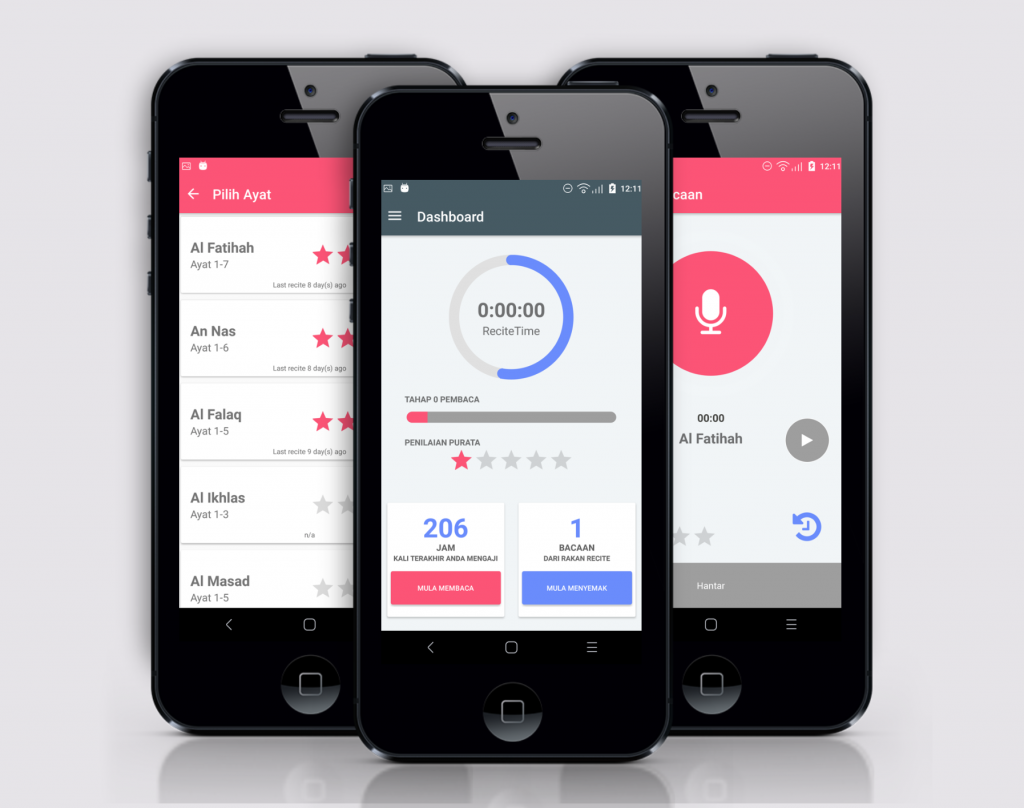 aCAT brings you the Startup Story of Recite Lab, whose app aims to address the common Quran recitation issues faced by adult Muslims.

Properly reciting the Quran is a fundamental skill so Muslims can fulfill the tenets of Islam such as their five daily prayers and the Hajj.

A new player in the app store, Recite, is set to take the regional Muslim tech world by storm with its innovative solution to help Muslims struggling with Quran recitation.

In aCAT’s first Startup Story of 2018, meet Recite Lab and discover how they came up with their one-of-a-kind Quran recitation validation platform.

Based in the bustling city of Kuala Lumpur, Recite Lab is the hardworking startup that created the amazing Recite app.

As an adult Muslim, it can be incredibly costly and difficult to locate Quran learning classes.

That’s where Recite comes in to save the day.

With the app, users can easily validate their Quran recitals anywhere, anytime, at a fraction of the typical cost.

The main things you can do with the app are reciting the Quran and validate the recitals of fellow users.

Recite makes it remarkably easy to recite your preferred verses from the Quran and safely stores your recitals which can be validated by qualified and credible sources.

Not only will you perfect your pronunciation but you can, in turn, contribute to the ummah by validating their recitations.

The Recite team genuinely hope their app will encourage more and more adult Muslims to revive their interest in learning the Quran.

While reciting the Quran can seem daunting and your lack of skill may feel embarrassing, Recite is here to ease your worries.

The problem faced by many

“Prayer does not change God, but it changes him who prays.”

About one year ago, Fairiz and Mazlita, the co-founders of Recite, came up with the initial concept following an enlightening conversation.

They were having a casual chat one day when Fairiz shared that his son had asked him about Tajwid (Quran recital rules) after coming home from school.

Not knowing how to really answer his son left him feeling inadequate. Fairiz was surprised when Mazlita admitted to going through a similar experience.

She even observed that it was tremendously difficult to locate suitable Quran teachers for home lessons.

They realised then that an overwhelming number of adult Muslims were simply too embarrassed to get help in improving their Quran recitations.

Weeks of brainstorming later and they got the idea for an app where users could submit Quran recitals and receive feedback from others.

Fairiz and Mazlita were confident Recite was feasible as they were familiar with Smule, a company that developed numerous music-making apps based on that very concept.

And that was how they embarked on an arduous yet thrilling startup journey to make it happen.

(From left to right: Mazlita, Fairiz, and their team member Faridah)

For almost two decades, Fairiz has been heavily involved in designing and developing software.

As Android began gaining traction in 2010, he made the jump to mobile app development.

He quickly picked up new programming languages and is currently proficient in many of them, including Assembly and Swift.

While programming is his forte, Fairiz can’t say the same about his social skills, which is why he’s grateful to have Mazlita.

As the other co-founder of Recite, Mazlita complements Fairiz with her outgoing personality and management capabilities.

Mazlita is bold and a risk-taker when it comes to making the big moves in business. Having run her own IT company previously, she certainly has the experience to justify her actions.

Fairiz describes her as someone who tends to rush into situations head-on whereas he prefers to step back and analyze all aspects before making any decisions.

He notes that their different approaches to business have their respective pros and cons.

However, their contrasting personalities are useful in seeing both sides of a scenario.

Overall, this is a duo that cleverly plays off each other’s strengths to bring their startup to even greater heights.

Rewards from an unexpected opportunity

Following a pitch for Cradle’s CIP150 grant, Recite Lab received an invitation to participate in the Coach and Grow Program (CGP).

Back then, the co-founders didn’t even know what CGP was but decided to give it a try and see where it would lead them.

Little did they know that they would be going through one of the most rewarding experiences along their startup journey.

The accelerator program totally changed the duo’s mindsets and attitudes. Their coaches grilled them nonstop about validation, metrics, and the like.

Tough love really helped them and they emerged as the winner of the “Most Progress – From Idea to Commercialisation” award.

After a string of lucky breaks, the team eventually hit their biggest bump in the road to date.

Beta testers were few and far between as hardly anyone seemed to respond to their social media campaigns. The Recite team were scratching their heads, unsure of where to go next.

They eventually figured out what went wrong.

It was their lack of understanding of their target audience. The team just didn’t get their users enough.

So Recite Lab adjusted their strategy and successfully turned the situation around.

With a valuable lesson learned, they applied it when they visited Indonesia. They faced users early on to get their feedback on the app, which gave them promising results.

As word spreads of this brilliant app, they even secured deals with institutions like International Islamic University of Malaysia (IIUM) and Zakat Selangor.

The team is very excited to announce that they plan to release a new version of Recite soon. The update will feature a special speech analytics component that they believe is among the first of its kind.

Other astounding developments include their partnership with the world’s largest Muslim organization and a potential deal with an Indonesian telco.

Furthermore, their beta testing sessions with Indonesian users since October 2017 have been preparing the team for their Indonesian launch in early 2018.

According to Fairiz, it has been their intention since day one to offer an easier, more convenient, and cheaper avenue for adult Muslims to master Quran recitations.

Their goal is to validate users’ Quran recitations and not to teach it.

This is because the team believes that the best form of Quranic education should be done face to face and with the proper teachers.

Factors such as work schedules and family commitments can make it hard to find time to attend Quran learning classes.

Recite is merely an option for those times when Muslims have trouble arranging such lessons.

At the end of the day, it’s all about making Muslims aware that they need not feel ashamed for seeking help in improving their recitations.

Recite is certainly playing a huge role in dealing with this commonplace issue and it is expected to continue doing so as the app is frequently improved.

If you’re not ready to deal with rejections, then you’re certainly not ready for entrepreneurship.

Fairiz has been through it and admits that the first 10 rejections will hurt. A lot.

But instead of closing in on yourself, look for the lessons to be learned from each failure.

Through these rejections, you will find better ways of doing things moving forward.

2. “Do not get stuck on your initial business model.”

Fairiz knows from experience that a good startup has to be capable of adapting. You need to be able to get creative with your revenue generation.

Once you’ve planned out your business model canvas, do not treat it like it is set firmly in stone. It will and should evolve from time to time.

He also advises readers to take caution if their model involves a freemium tier or multi-sided user segment as they should be wary of their unit economics.

“When rejected, you’ll get demotivated and start questioning yourself. The trick is to figure out how to deal with the rejections and move on.”

If you liked this story, share it with your friends. Check back here next month for a new Startup Story. Have anything to add? Want to tell us how much you loved this article? Talk to us in the comments section below.

Sam is a copywriter for shuant.com. She is still picking up the tricks of the trade. As a word nerd, she loves to make the most of her language skills. Her other passions include blogging, photography, and music.