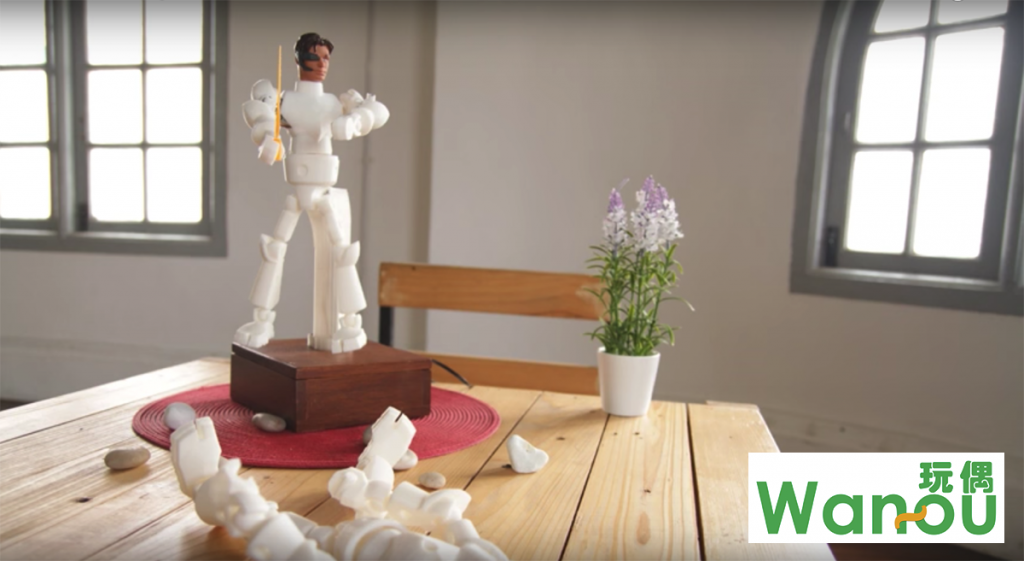 Do you know toys can be brought to life with technology? @CAT brings you Wanou’s startup story.

From Barbies to Batman, people have obsessed with character toys and action figures for a long time. But what if you could interact with those toys as if they were real and alive? Just like this.

That is the premise behind this ingenious Penang startup, Wanou, a new addition to our Startup Story Series.

The drive to deliver mixed reality—often known as hybrid reality—experience to the users spurs Wanou to life. The mix we’re talking about here are the composite of reality itself with virtual reality (VR) and/or augmented reality (AR). A trending medium of communication and entertainment today puts hybrid reality into games, online training and more.

Wanou means “play figure” in Mandarin. So Tan Yar Loon, Founder of Wanou, took the name and built his robotics startup to what it is today. At seed-stage currently, the company develops tabletop entertainment robots with augmented reality (AR) that enhances your playing experience.

With Wanou,  you can command the movement of a virtual figure through real-world settings or use Wanou robot to interact with animated elements.

The spark that ignited a fire of creativity

To understand the Wanou story, we need to know a little bit about Yar Loon. An electronics engineer by trade, he possesses an MBA in Creative Industries Management.

A few years back, Yar Loon got acquainted with Arduino, the popular open-source electronics board.

Being an inquisitive person, he started tinkering with the device. He played around with the modules like touchscreen, voice recognition, and infrared motion sensor modules.

Yar Loon is also an avid fan of toys and figures. Being subscribed to Argos is one of the consequences. Argos is a large British catalogue retailer he often used to discover latest toy trends.

An epiphany came to him on a fateful day in the form of an Argo’s newsletter and a segment called “Toys to Life.” He absorbed the materials like a thirsty guy in a desert. He learns about the trending combination of physical toys and video gaming. Think Pokemon Go.

He turned to inspect his figurines on the desk. His mind was far away as he imagined those characters came to life and interacted with him. Without wasting time, he quickly got into working the idea that began taking a promising shape.

Charging forward with just three people. But you know what they say, the power of three. Right. Sometime in October 2015, Wei Jun and Ethan, the software guys, as Yar Loon calls them, jumped on board after he pitched his idea. And the rest is history.

Wanou strived relentlessly and came out on top. MDEC selected them to join its MSC Malaysia Global Linkages Program, which provided them with the opportunity to network within global startup ecosystems. The following year saw Wanou presenting their prototype at the LAUNCH Consumer IoT Summit in Hong Kong. The team even pitched their idea when they attended the Global Startup Contest.

Wanou was recently nominated in the “Best Toy & Game” category at the Auggie Awards 2017. As some of you know, the Auggies are the most prestigious awards in the augmented and virtual realities industry.

Seemingly, the never-ending struggles of a startup happened to Wanou too. Despite Team Wanou’s highs, they have been through some devastating lows as well.

Yar Loon told us about his struggles in starting from nothing; still struggling to make it work today. This is significantly worse for hardware-focused startups.

He recalled the early days of Wanou when he learned to build a 3D printer from scratch. The travails of drawing 3D CAD models all by himself just to create the prototype. The self-learning process continued when the team members wanted to add 3D animations and gaming elements to the software but didn’t know how.

Plenty of moments proved frustrating to the team as they strived to build a suitable working prototype.

But that made their victories even sweeter when they finally achieved their “Eureka!” moment.

Yar Loon described Wanou’s biggest challenge as the time when they were continually turned down by most of the investors they pitched. Countless rejections have never set Wanou back. Neither did the team in giving up. Instead, the team has been fighting even harder for a breakthrough in what they believe in.

Aspirations and the future for Wanou

A believer of multicultural and interdisciplinary thinking, Yar Loon aspired to invent a product that connects various disciplines and stimulate interactions from all kinds of people.

Yar Loon believes the moment is now. It is the dawn of a new era, that is, an age of robotics, AI, IoT, AR and VR.

That said, Wanou’s goal is to offer an integrated solution not just affordable but also accessible to everyone. Those were the main reasons for their choice of tabletop entertainment robot as their starting point.

Today, they have a fully functional hardware prototype with complete software solutions. “A robot ready to dance on your command,” Yar Loon happily added.

Often enough, startups need an adequate amount of funds to pursue their goals. In Wanou’s case, their hardware production requires a sizable sum of money. As such, Wanou is currently seeking funds from interested investors or partners to help them develop further. Meantime, they plan on commercialising the software aspect of their solution to generate some revenue.

To see Wanou’s figures in action, check out the videos below.

1. “Actions are better than ideas.”

While having ideas is great, if we only talk the talk and never walk the walk, then we’ll never go anywhere. We have to start proving our concepts to make it possible.

If you believe in an idea for a startup, then go out there, talk to your target audience and get going!

It’s okay to be afraid of starting something that’s never been done before. But successful entrepreneurs only achieved greatness when they took risks and made big moves.

Your business will never be real until you make it so.

2. “Getting something done is better than having it perfect.”

All creative individuals have the desire to perfect their work or invention. It’s only natural to want your ideas to come out exactly as you picture them in your head.

But if you worry too much about something not being perfect, you’ll never be satisfied with what you’ve already built. Learn to appreciate your process and your pace. Remember, Rome wasn’t built in a day.

Your project takes time and patience. Don’t worry if it’s not perfect yet or ever. What’s most important is the start. Then develop it the best you can. Then, at least, you’ve taken a step nearer to accomplishing your dream.

Unique ideas are hard to come by. Once you’ve got it, you should make every effort in chasing your passion.

There will be times you’ll want to throw in the towel, but Yar Loon stressed that it’s vital to keep going. Quitters never win, and winners never quit. And for those who have yet to stumble upon the next big thing, it’s okay. Keep having those brainstorming sessions and look for inspiration from daily life. One day, the idea will hit you suddenly and without warning.

Until then, keep looking for it. Talk to people and learn about their desires, hopes, and dreams. You never know, they might introduce you to your groundbreaking idea.

Lastly, don’t settle for mediocre ideas that you half-heartedly believe in. For a startup to attain success, the idea has to be something you truly believe will bring about change.

“We have achieved an integrated solution of Robotics, AR, AI, and IoT. You can accomplish anything too if you believe.”

If this story helped you or inspired you, then be on the lookout next month for more in our Startup Story Series. Let us know what you think in the comments section below. We’d love to hear your thoughts.

Shuant is a freelance copywriter and content marketing strategist, problem solver, and an explorer of all things new in life and beyond. She has been creating content for more than eight years for a myriad of industries. When she’s not writing, you can find her chasing lines in her wide range of book genres. As an aficionado of productivity and effectiveness, she’s also currently working on her startup, TheWriters.Co to enable freelance writers to write more, earn more, do less project management.

Hi there! You may want to check out our latest demo that we did exclusively for Penang! https://youtu.be/PRQ0e9hmAWA

Thanks for sharing, Wanou Team. I believe many people would love what you did for their beloved Penang.